News has reached us of some serious damage to the world-famous sector of Contrafort de Rumbau in Oliana. Apparently, the raging wildfires that have devastated parts of Catalunya recently, engulfed much of the cliff, rendering many routes unclimbable, either temporarily or permanently.

In particular, the left-hand side of the wall (everything left of the route 'Mishi) is said to have been totally destroyed in terms of climbing, with rock falls occurring in the intense heat. Further to the right, the damage has been less severe, but all routes will need to be checked for dangerous holds and bolts before any climbing can begin again.

Signs at the base of the approach path have been erected to deter would-be visitors.

Fires have also raged across other parts of Lleida province, in particulare, close to the zones of La Pauta and Alòs de Balaguer. We will provide further updates as and when information becomes available. 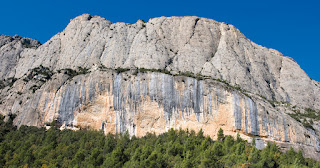